Five women shaping the landscape of virtual and augmented reality

With International Women's Day this week, we thought it timely to feature some of the women trailblazing in the virtual sphere. While looking forward to the time where everyone is celebrated equally all year round, there historically has been a distinct lack of diversity within the tech world. Therefore, it feels pertinent to use this time to highlight the exciting voices creating work that surges off our screens, inspiring more than an electrical hum in our minds.

While studying textile design at Chelsea College of Art, Tay became interested in the 3D and digital sphere potential. Astutely, she noted its potential to help reduce waste as well as finding the medium exciting. She also spotted the distinct lack of other women working as 3D designers, which led her to create Digi-Gxl. By now, most people are familiar with Digi-Gxl. For those not clued up, the platform is a global community of womxn, intersex, trans folk & non-binary people specialized in digital design and XR. Fast forward to 2021, brands seemed to have caught on seeing her collaborate with Nike, Vogue Italia, and Selfridges leading her to co-found the Institute of Digital Fashion alongside Leanne Elliot Young. 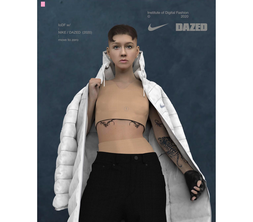 After the financial crash, Keisha Howard had a moment to re-think her life working on the property ladder. Like a true gamer, she didn't give up. Instead, she re-invented and re-charged herself. While she had gamed her whole life and used the mechanics of them to keep thinking creatively, she'd not seen the industry as a viable professional option. This led her to found "Sugar Gamers”, a space for people to meet up in real life as a community to reflect on the lack of representation that she noticed in other spaces online. In Howard's words, "I started sugar gamers before GamerGate, before #metoo, and before Black Lives Matter, understanding that there are, you know, sort of issues within how our communities are structured in certain industries. Again, I wanted to belong to a community where there are women, where there are people of color, where we met in real life. So you know, we can build actual real bonds". Since then, she has gone on to deliver two TED talks, work for brands like SYFY, Watchmojo, AT&T, HBO, Nintendo, HTC, Microsoft, Google, as well as inspire listeners with her fresh take on how to imagine the future through a Solar-Punk lens.

Not only is Jabbar an award-winning director, but she is also the mind behind HERVISIONS. The platform is a femme-focused curatorial agency, celebrating and promoting artists working across emergent technologies and platforms, with a strong focus on the intersection of art, technology and culture. It'd be more fitting to ask who hasn't collaborated as the collective’s resume is more than impressive, including Tate Modern, Tate Britain, Chanel, Adidas, Selfridges, Boiler Room, LN-CC, BFI and Google. A personal highlight was seeing Jabbar's live stream with the Photographer's Gallery, where she chatted about augmented realities, sustainability and feminism, period awareness, and activism alongside creators Maria Than, Scarlett Yang, and Mathilde Rougier. A memorable moment was her face in a filter that read, "error your account has been disabled because we can't handle nipples on femme / non-binary bodies. Free The Nipple!".

When you look at Ines Alpha's, aka Ines Marzat designs, you really feel like you see a vision of the future. Over the last few years, her name has become synonymous with the evolution of the beauty industry seeing her collaborate with Dior, Charlie XCX, Essence, Nike and more. With gills that exude from a model's jawline as the brand's bottle drifts beneath their chin... it is no wonder that Alpha has said that she imagines the future of beauty will go beyond cosmetics to include modifications and 3D printed items that individuals could accessorize their faces with.

In the virtual and augmented reality sphere, Nonny de la Pena is a bit of a legend. Dubbed the "Godmother of Virtual Reality", she is widely regarded as the fore-runner of immersive journalism. After graduating from Harvard, de la Peña freelanced in Mexico with the Fund of Investigative Journalism's assistance. Her journalistic practice has influenced her work's content as she is best known for her human rights-related projects such as "After Solitary," which tells the story of Kenny Moore, a recently released inmate from Maine State Prison. Using photogrammetry and volumetric video capture, 'After Solitary' allows the viewer to step inside a solitary confinement cell and premiered at SXSW, winning a jury award. Through her company, Emblematic, founded in 2007, she has created many innovative projects that use technology to challenge various human rights abuses and immersive experiences for brands like Cartier.